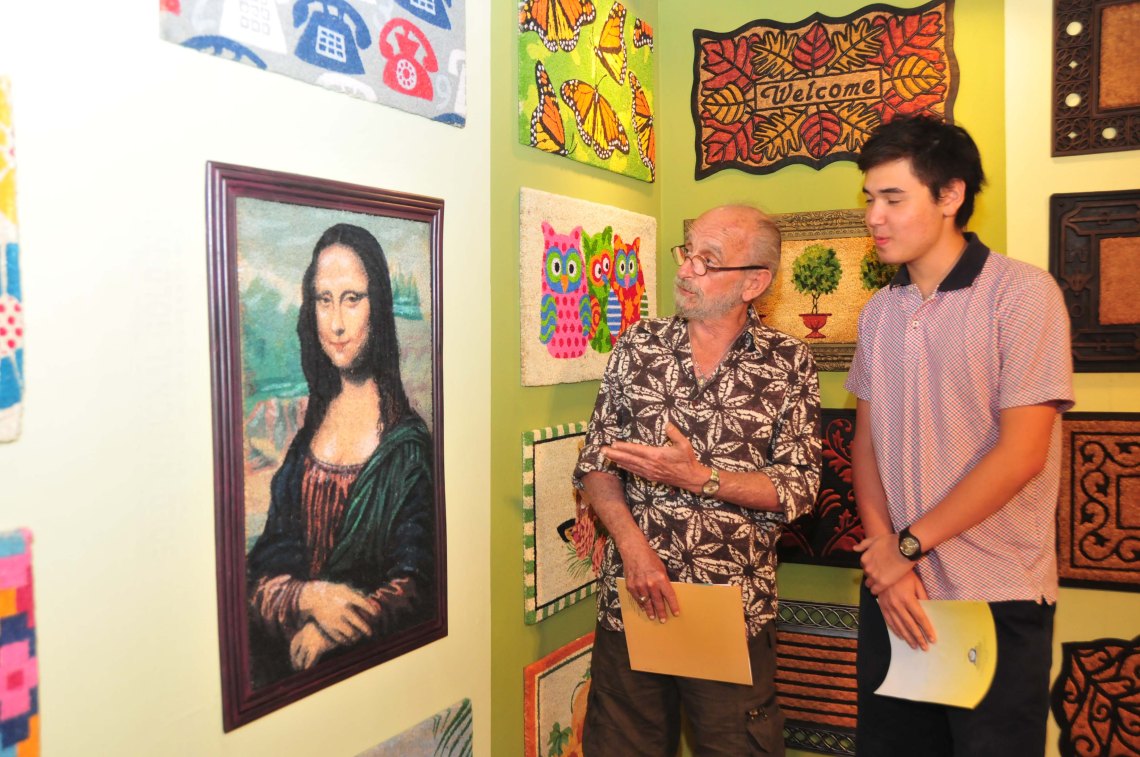 Lying in a bullet-proof enclosure of Louvre Museum in Paris for centuries, she continues to radiate a teasingly enigmatic smile to all those who come to watch her portrait.

The ‘Mona Lisa’, a half-length portrait of a woman by the legendary Italian artist Leonardo da Vinci, is in oil on a poplar panel. In God’s Own Country, the increasingly stunning portrait has undergone a transition from oil to coir; a tribute to remarkable craftsmanship of Kerala’s gifted coir community.

Designed and developed by a local company, Fiber World, the replication of Mona Lisa on a coir mat tries to retain most of the charm and grandeur of the original painting — the sensuous curves of the woman’s hair, the indefinable smile lingering on her face and the different colors.

“The idea for Mona Lisa on coir came from a Brazilian customer who suggested that coir, which has been mostly used for making doormats, could be innovatively used for wall hangings. Thus germinated the idea of coir from doormat to wall hanging,” says Roby Francis, Managing Director, and Fiber World.

“There was another idea that motivated us to go for wall hangings in a big way. In door mats, we use mostly six colors. In the coir Mona Lisa, we have used 13 colors, giving it a glossy and colorful look. Earlier, we had made a coir wall hanging featuring celebrated Hollywood actress Marilyn Monroe, using 16 colors,” he points out.

Francis says there is a great demand for the Marilyn Monroe wall hanging abroad. “Commercially, it has been a successful venture. We expect the same response for Mona Lisa wall hangings also.”

Sudheesh, a designer with the company, gives an insight into the making of the Mona Lisa wall hanging. “We copy the original picture by putting it on a stencil plate. It is then fixed on a PVC coir mat. We make separate plates for all the 13 colours used in this particular wall hanging. Finally, it is put in a rubber frame with wood finishing.”

The company believes there is a big market for such coir wall hangings both in India and abroad. The Mona Lisa wall hanging, measuring 60×90 cm, is priced at 9.75 dollars. A buyer from Delhi has ordered 100 pieces from the company, which has put up its stall at the ongoing Coir Kerala 2013, a six-day showpiece international event on the coir sector that began here on February 1.

Among the greatest attractions and the most celebrated work of Leonardo in the Louvre, Mona Lisa is viewed by about six million people each year. In 1852 its market value was 90,000 francs; in 2010, it spiralled up to an estimated $720 million. Unsurprisingly, it is hailed as ‘the best known, the most visited, the most written about, the most sung about, the most parodied work of art in the world.’

“We have made an humble attempt to replicate the masterpiece through coir,” says Mr. Francis, adding: “It is imperative for Kerala’s coir industry to go for value added products to justify the moniker of coir as golden yarn.”

Hi! Welcome to Confluence, which I founded way back in 2008, while I began my journalistic journey in 2002, so yeah its been good 19 years. In a time span of 19 years, I have worked with Hindustan Times, Times of India, Viacomm 18, and have extended my expertise towards specialised travel based projects such as Incredible India, Spiceroute, Shubh Yatra to name a few… Let’s flow together to discover the latest trends in food, travel, home & living, fashion, relationships, photography and the phenomenon called life ! Here, you will get my take on travel, food, lifestyle, photography and lots and lots interesting stuff. Currently, I am featuring women achievers in the month long series..so if you think you have it in you, drop me a line at confluence.by.nitika@gmail.com Live life, queen size is my mantra, discover your mantra through a confluence of mind and imagination 🙂 Nitika Bajpayee View all posts by nitikabajpayee

The journey so far…