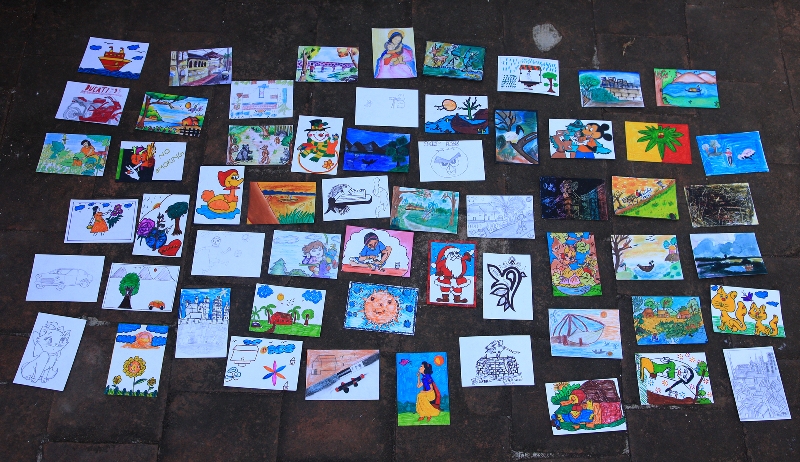 From outside, the room has the look of a quaint old attic and not that of a new-age art gallery. Enter its small interiors, and a pleasantly heady smell of the spices gives a welcome pierce to your nose.

For a couple of seconds, the visitor may forget that the venue is that of a contemporary art show — leave alone its historical slant and momentous significance. Well, this is only just one of the several novelties at the Kochi-Muziris Biennale — India’s first in the 118-year-long world history of such an exhibition defined by big-size works of art in vast and open spaces. Basically, the artist at the olfactory-centric work in the ongoing show has installed a “spice speaker sound system”. Dylan Martorell’s intelligent and interesting installation uses the frequencies of sub-bass to generate specific clouds of mixed spice. The Scottish artist who lives in Australia has built his work seasoned with a local masala that includes fenugreek, turmeric, ginger and cinnamon.
“Ah, never knew pungency (in any smell) can be this fascinating,” shrugs Briton Michelangelo Bendandi of the Kochi Biennale Foundation (KBF), after coming out of the young Martorell’s section at Fort Kochi’s Aspinwall House, the main venue of the pioneering three-month festival that is slated to conclude on this March 13 — weathering many a hurdle. Such is the sylvan nature of the sprawling heritage building that is Aspinwall by the seaside that the visit might naturally think of Kerala’s spices — something that has given the country’s slender southern strip a global flavour for long. Even so, the biennale is definitely much beyond being a refreshing celebration of its commercial glory of the yore. In fact, it is more about the state’s contemporary artistic contributions, even while taking a peek at its rich heritage and striving for a grand link between the two points in time.

That is clear from the very name of the latest edition to the biennale editions on the planet. For the first time, two places are hosting the same extravaganza that is meant to be held every second year. As a fast-developing coastal metropolis in the developing world, Kochi should be a familiar word for globe-trotters, but what exactly is Muziris? Actually, Muziris — an Arabic-laced pronunciation of ‘Muchiri’ in local Malayalam language — used to be even more cosmopolitan than present-day Kochi. That, for almost one-and-a-half millennia, until a suspected tsunami washed away much of that port-city in 1341, leading to the formation of Kochi as a natural harbour some 30 km south of it.
The KBF brilliantly sought to connect Kerala’s update on art with its heritage backing to an epoch even Before Christ. Result was a splendid set of installations stemming from this historical perspective. A couple of such works of art sharing the same hall at the British-era Aspinwall House can best epitomise this pattern. The 162-year-old warehouse has septuagenarian celebrity Vivan Sundaram’s installation made of discarded pottery shards arranged adjacent to Subodh Gupta’s huge country-boat that is a metaphor for refugees’ travails following natural disasters. For, both are essentially portrayals against the backdrop of the loss of Muziris — traced to Kodungallur area in today’s Thrissur district.
Not surprisingly, even without alluding to Pepper House (another of the 14 venues hosting the biennale that began on 12/12/12), veteran artist Gulammohammed Sheikh of western India’s art city of Baroda in Gujarat state notes with a smirk: “Kochi has opened its ‘godowns’ to showcase many images of the region’s less-popular history.” That apart, contemporary art has an omnipresent quality at the biennale. As if to promote its ‘impulsive’ quality, the organisers are entertaining ‘unscheduled’ arts at the various venues. Martorell, 41, for instance, assembled discarded articles from the open in early 2013 and gave the scrap not only scrap shapes and colours, but even sounds that were unmistakably musical, much to the curiosity of a beach crowd that gathered impromptu after the New Year carnival in West Kochi.
Such free-spiritedness on the part of visiting artists and the organisers has led to the coming up on certain “unscheduled” frescoes and installations at the biennale. For instance, quite a few painters and students from within India and abroad came to the city as curious visitors at the biennale, but ended up doing a wall painting (even on the street fences) or installations in the open. An end-2012 brutal rape of a Delhi student, which evoked country-wide condemnation and invited international media attention, prompted the biennale artists to chip in their bit of protest. A huge painting of a screaming naked infant girl came up in two days. In fact, that is how the artist, P S Jalaja, happened to usher in the New Year in a sombre way even amid the festivity. Indeed, the biennale even staged certain classical theatre as part of its parallel performance-arts segment, but each show tuning well into the theme of Muziris heritage.
What’s more, the biennale has coincided with Kerala’s annual tourist season spanning from October to April, much to the boost of the state’s economy, the people’s happiness and the government’s benefit. Indeed, past experiences show that biennale cities of the world have shown making a giant leap forward in terms of monetary influx besides finding a new stamp on the international tourist map.
“The eventual result of our endeavour won’t be any different,” says KBF president Bose Krishnamachari, a co-curator of the biennale. “Only that we had to weather several hurdles from envious art coteries in the run-up to the show. We kept silent against them, and showed our final reply in the form of the wonderful public response that the bieinnale has invited.”

Adds co-curator Riyas Komu, also a Malayali artist like Mumbai-residing Krishnamachari: “The veterans in the field of visual art in Kerala couldn’t perhaps digest a young generation initiating a paradigm-altering event like the biennale. But then, we went on with what we had planned.” While cartoonist Bonny Thomas did a lot of research as a KBF trustee to ensure that some of the exhibits looked tailor-made against the Muziris background, editorial director Sabin Iqbal managed to even bring out a book titled Against All Odds narrating how the foundation sensed victory in its mission.

Sure, success tastes sweeter after bouts of challenges.

Points of Curiosity
1. Kochi-Muziris in India’s first biennale in 118 years of its world history.
2. Unlike the global norm, it is being held in two localities. One is Kochi, which a coastal central-Kerala city, and the ancient port-city of Muziris (near modern-day Kodungallur) which was lost in a flood (suspected tsunami) in 1341 AD (after which Kochi rose to prominence as a commercial centre).
3. India maybe having yet another uneasy time with its neighbour across the western front, but Kochi-Muiris Biennale has 3 artists from Pakistan — Bani Abidi (Karachi), Nalini Malini ( born in Pakistan but she is now settled in Mumbai), and Rashid Rana (Lahore)
4. There is a rhyme to the number of artists and their break-up: the biennale has a total of 88 artists, 44 of whom are Indians, of whom 22 are artistes with moorings in the local state of Kerala.
5. There is a ring, also to the dates of start and conclusion: Began on 12/12/12 and is ending on 13/03/13.
6. One of the artists, whose work figures in the festival, is dead. K P Krishnakumar, a firebrand Malayali, committed suicide on the day after Christmas in 1989.
7. Some of the participant artists are very young: in their early 20s.
8. The art works NOT for sale unlike at other biennales.
9. The Kochi-Muziris edition has a parallel performance-arts festival (featuring ethnic and indigenous classical forms of historical value).
10. Most of the galleries, unlike in the case of other biennales, are not state-of-the-art; instead renovated heritage buildings that retain a degree of roughness and old-world charm.

Hi! Welcome to Confluence, which I founded way back in 2008, while I began my journalistic journey in 2002, so yeah its been good 19 years. In a time span of 19 years, I have worked with Hindustan Times, Times of India, Viacomm 18, and have extended my expertise towards specialised travel based projects such as Incredible India, Spiceroute, Shubh Yatra to name a few… Let’s flow together to discover the latest trends in food, travel, home & living, fashion, relationships, photography and the phenomenon called life ! Here, you will get my take on travel, food, lifestyle, photography and lots and lots interesting stuff. Currently, I am featuring women achievers in the month long series..so if you think you have it in you, drop me a line at confluence.by.nitika@gmail.com Live life, queen size is my mantra, discover your mantra through a confluence of mind and imagination 🙂 Nitika Bajpayee View all posts by nitikabajpayee

The journey so far…